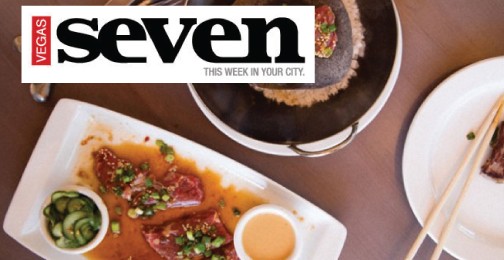 Sammy’s Restaurant, Bar & Grill Has a Little Bit of Everything


Sami Ladeki is one smooth operator. Perhaps you’ve eaten in one of his five Las Vegas area restaurants, Sammy’s Woodfired Pizza, where, contrary to the name, you order from a menu filled with dishes from all over the world. A former Caesars Palace food and beverage director, Ladeki has been here a long time while also running Roppongi, a Japanese fusion restaurant in La Jolla, California, among many other ventures.

Now he’s opened his most ambitious local venue yet, Sammy’s Resataurant, Bar & Grill, in a Green Valley site that formerly housed an Applebee’s. A local design firm has extended the space by adding 2,500 square feet to the original 6,000, so that now what we have is a low-slung, chic dining room with an atrium, open kitchen, enclosed patio and smartly chosen furniture.

Those are real cactus plants hard by the faux orchids, and cushy sofas to relax on for those of us who choose not to sit on the sleek, high-back chairs. It’s a calming space, too, done in pastel colors, with a beige tile floor and servers clad in jet-black uniforms.

But at breakfast, which starts at 7 a.m. sharp, things are almost too calm. It seems as if the locals haven’t yet discovered the place for breakfast, although the Cracked Egg, the joint across the street, is buzzing at this hour. And that’s a pity. Because Sammy’s has a superior menu, one that includes terrific brioche French toast stuffed with an orange-scented mascarpone, and great breakfast pizzas, such as bacon and mushroom with free-range egg, tomato, red onion and cheddar cheese.

The Crab Stack at Sammy’s. | Photo by Anthony Mair

Come at lunch, dinner or late night, though, and you’ll experience one of the most eclectic menus here—or anywhere, for that matter. Ladeki’s creative corporate chef, Jeff Moogk, has stacked the deck with a diversity of dishes: From Sami’s native Lebanon, there is a noteworthy Mediterranean dip sampler with hummus, baba ghannouj, lebni (a soft, creamy Lebanese-style cheese) and flatbreads with which to enjoy them. From Japan, there are delicious chicken meatballs and miso-glazed eggplant. And from other Asian ports of call, there is kung-pao calamari, spicy Thai grilled chicken and pork dumplings, among dozens of choices.

Salads are a strong suit here. The canny Ladeki has introduced a red quinoa salad (how trendy) and organic kale salad with figs and almonds, tricked out with feta cheese and a tart pomegranate vinaigrette. Entrées could be braised lamb shank, cioppino or even shrimp with organic grits, a Low Country favorite from the American Southeast. This menu leaves few stones unturned, including a hot stone on which New York steaks are cooked at the table, in slices.

We can’t ignore the pizza, of course, thin-crusted, generously sized pies that groan with ingredients such as arugula and pear, burrata and pesto, even one with smoked bacon, raclette cheese from Switzerland and fingerling potatoes. Naturally, you’ll get a pepperoni pizza or a Margherita, if that’s what you’re after.

The menu extends here to pastas, wraps, burgers, even tacos. “You can get anything you want at Alice’s Restaurant”—a ’60s tune that seems apropos in this context. There are even desserts such as sticky toffee pudding and warm crisp mini-donuts, almost de rigueur on any trendy new menu.

So, will it all play here in restaurant-deprived Green Valley? Sami is betting on it.