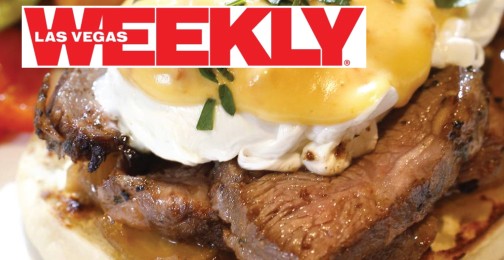 Sami Ladeki Expands on Global Cuisine With His New Sammy’s


There’s a scene in Talladega Nights: The Ballad of Ricky Bobby—classic cinema to be sure—in which Frenchman Jean Girard asks patriotic intellectuals Ricky Bobby and Cal Naughton, Jr. what the United States has given the world, “apart from George Bush, Cheerios and the Thighmaster?” Of course, they answer with cuisine: Chinese food, pizza and chimichangas. It’s funny and ridiculous, but there’s some truth there.

That stupid scene came to mind when I was lunching with Sami Ladeki, creator of the Sammy’s Woodfired Pizza empire, who has opened a fifth local restaurant—with a decidedly different menu. Sammy’s Restaurant, Bar & Grill just arrived this week in Henderson. As you can tell by the name, there’s much more going on there than pizza.

“The whole idea is to have a place with comfortable, homey food, but what is American food anymore?” Ladeki asked. “American food is ethnic food. Once in a while I want Chinese or Thai food, but once in a while I want to have great barbecue, too, or maybe a taco. I don’t want to be restricted.” Neither does his ambitious new restaurant, an 8,000-square-foot, family-friendly space open around the clock.

Sammy’s Woodfired Pizza, which Ladeki developed in Southern California in the 1980s, evolved beyond pizza, pasta and salad long ago. It launched in Las Vegas when Ladeki built his West Sahara restaurant in 1997. An alternative to franchised neighborhood eateries, his restaurants are now recognized as much for internationally inspired tapas like chicken lettuce cups and duck tacos with feta cheese as they are for crispy thin-crust pizzas.

The new Sammy’s reaches further, with more entrée options, an expanded wine list, breakfast and more around-the-world eats. “Usually menu changes take a lot of soul-searching,” Ladeki said. “This time I said to myself, the food is right, the price is right, we have a nice atmosphere, we just need to give people more choices.” Get ready for a lobster omelet in the morning, a crab stack for lunch—crab meat, pea shoots, red onion, cucumber, avocado, tomato, peanuts, cilantro and mango—and braised lamb shank with Mediterranean spice mix za’atar for dinner.

As for ambiance, expect a casual vibe similar to your neighborhood Sammy’s, just more of it—there’s a 3,000-square-foot “living room” with floor-to-ceiling windows and oversized furniture, perfect for groups who aren’t looking for a private dining room.

Ladeki, who operates about a dozen restaurants in Southern California, isn’t afraid to try something new. “When you’re a musician, you don’t just make two albums and stop,” he said. “Restaurants have to change a little, to make it exciting. And people’s eating habits are always changing, too.”

When he opened his first restaurant in San Diego’s ritzy La Jolla neighborhood, health inspectors were confused by his wood-fired pizza oven. “Nobody was doing anything like that 25 years ago,” Ladeki said. Perhaps the new spot will similarly update neighborhood dining. “At the end of the day, it’s so exciting when you finish it and see what has been built. Sometimes your vision doesn’t come true, sometimes it does. That’s the challenge.”