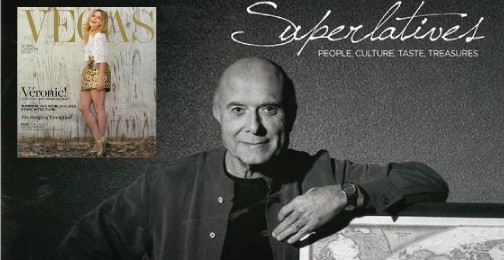 
When Sami Ladeki opened his first restaurant, he didn’t even hire a chef.

“I served items that didn’t require anyone with a lot of culinary knowledge,” Ladeki confesses. “The menu was made up of all really simple dishes, things that were easy to make.”

His no-frills approach paid off. Ladeki Restaurant Group now owns and operates 21 Sammy’s Woodfired Pizza & Grill locations throughout Southern California and Nevada (two of them at airports, LAX and McCarran), as well as his latest venture, Sammy’s Restaurant, Bar & Grill, which opened in Henderson in September.

While he admits he lacked serious culinary chops, Ladeki was far from inexperienced. Prior to opening the first Sammy’s, in La Jolla, California, in 1989, he had a successful career in hospitality. Born in Lebanon, he attended hotel and restaurant management school in Germany, where he was recruited by the Royal Sonesta Hotel in New Orleans. After military service, feeding troops in Louisiana during the Vietnam War, he returned to the hotel and stayed until 1976, leaving to become the food and beverage manager at Caesars Palace in Las Vegas.

“Las Vegas was a very different place back then,” Ladeki says. “There were only about 150,000 people living in the city, and not much beyond the Strip except for desert.”

He departed Caesars to join the Princess Hotel in Bermuda but admits that he was “growing tired of the pressure of working for big companies and wanted to open something of my own.”Robin Leach joined Ladeki to celebrate the opening of the Henderson location last September.

Financing his first restaurant himself and putting in long hours, Ladeki offered something new and innovative to the food scene around San Diego at the time: pizza cooked in a wood-burning oven. “I didn’t have anyone as a partner, and I barely had any savings, so I took out a Small Business Administration loan for $300,000,” he says. “I built out everything on my own. It was all homemade. I used booths that I sanded down and painted myself.” The first Sammy’s was an instant success—it took less than three months to pay off the loan—and additional locations throughout Southern California soon followed.

“For the second location, in Del Mar, the owner of the original location wanted to have a Sammy’s as the anchor, so they built it for me,” he says. “It was the same with the third location: I paid for the equipment and furniture, but the developer paid for everything else.”

In 1997, Ladeki brought his popular pizza concept to Las Vegas with a location on West Sahara, and later in Centennial Hills, on South Rainbow, and on West Flamingo.

And as the brand expanded, so did the menu, with the addition of small plates like chicken lettuce cups, crab and shrimp dip, and hummus—a Ladeki family recipe.

“People started making meals out of the tapas,” he says. “Over the years, I watched people getting healthier and make better choices about what they eat. We now sell more salad than pizza.”

For his part, Ladeki uses only the freshest local (“125 miles or less”) products at all of his restaurants. “No hormones, all natural, and organic when possible,” he insists.

With the opening of the breezily upscale new 8,000-squarefoot Sammy’s Restaurant, Bar & Grill, devoted customers now have even more choices, including a 10-ounce New York steak, a tender lamb shank, and shrimp with organic grits.

“I wanted the menu here to be bigger and better,” Ladeki explains. “This will be the Sammy’s prototype going forward. People’s eating habits are changing, and we’re changing with them.”

But the food isn’t the only draw at the Henderson location; it also features live entertainment, creative cocktails like the orange mojito and the Pear Persuasion, a strong craft beer menu, and a gaming tavern.

“We have a lively bar area, and the atrium is just stunning,” he says of the more than 3,000-square-foot “living room,” complete with oversized furniture and floor-to-ceiling windows. “People love sitting in that room.” Ladeki included. “I eat about four lunches and four dinners a week here. My wife and I are always inviting people to join us.”

He hints that you’ll be seeing more of him soon; Ladeki has his eye on Summerlin, Downtown, and the Strip.

“I’d like to do a Sammy’s pizzeria, or a Sammy’s salad bar,” he says. “I want to make it easy for people to come and get a delicious lunch or dinner with no hassle.” Whatever he decides to do next, what’s certain is that the expansion will continue in the Ladeki way.

“The best partner is the bank: They give you the money but don’t tell you how to run your business. I have had great experiences with banks. I wanted to do it my way.” Sammy’s Restaurant, Bar & Grill, 1501 N. Green Valley Pkwy., Henderson, 702-567-4000Read more at http://vegasmagazine.com/dining/articles/the-careful-restaurateur-sami-ladeki#DiUr6UOFjy3tg6su.99